Playing around with Linux

Today, I downloaded Ubuntu 5.10 live demonstration ISO and burned it to a disk. When I rebooted my computer, I was using Linux! In fact, I'm using Linux to make this post. Cool!

To be honest, it looks a lot like Windows. It acts a lot like Windows. But it sure is cheaper than Windows! Ubuntu is completely free, and comes with Firefox, Thunderbird, and Open Office. There are all sorts of applications that make Ubuntu a viable alternative to Windows.

While I'm not quite ready to switch, I am going to explore the world of Linux. However, so far, I'm impressed. Now all I need is a dedicated Linux box. . .

Posted by hiikeeba at 1:07 PM No comments: 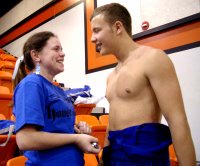 On 1/21, Brandon competed in a weightlifting competition in Llano. (It's not pronounced "Yeah-no" despite how it's spelled.) Dad went to watch. He took my camera. Yeah, I could post a picture of Brandon doing a successful squat, or bench press. But where's the fun in that?

That's his girlfriend. I'm still waiting on a name. . .

Posted by hiikeeba at 6:32 AM No comments:

I have a crush 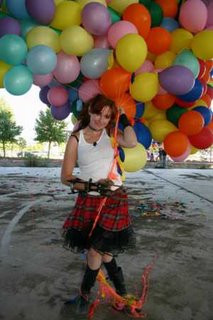 That little sentence has got all the single women in American in fear right now. I can hear them now: "Eeew!"

Relax. It's more like another reason to watch my favorite show, Mythbusters.

Kari Byron is an artist and mechanic. That is impressive!

Hotness is, of course, a bonus.

Apparently, the greatest problem facing mankind these days isn't fundamentalism, as we had all thought, but instead is cooking spaghetti.

A couple of years ago there was the pasta pot. A pot with a perforated lid, it allowed the cook to dump the water without losing the pasta. Now, it's the Pasta Express, a plastic cylinder that you put the spaghetti and boiling water. Let the thing sit on your counter until the pasta is cooked, then pour the water our the perforations on the top.

Hasn't anyone ever heard of a colander?

Posted by hiikeeba at 6:14 PM No comments: 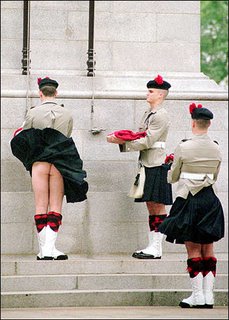 Last November 5, a young man of Scottish descent was barred from entering a Kansas City school dance because he was wearing a kilt. (No word if he was a real Scot - look left.) Scottish groups learned about it, and got outraged! Mounting a letter writing campaign that would make American Family Association get a woody, they got the school district to write an apology letter.

Posted by hiikeeba at 4:24 PM No comments:

Sean called today to tell us that Joanne was going to have a boy. He's due in June. Naturally, Sean is scheduled to deploy to Japan in July. He's understandably not thrilled with that.

While he was here at Christmas, he said that when his enlistment is up, he will enlist in the Army and try to get back to Texas. I warned him that if he joined the Army, he'd probably wind up at Fort Hood. And everyone at Fort Hood winds up in Iraq. I told him he would be better off in the Marines. At least they send him to Japan.

I told the boss that he would be heading back to Japan. She said I should go visit him.

Lessee: credit card minimums are doubling, thanks to our Congresscritters, so we can pay off our debts faster. Did they limit what credit card companies could charge in interest? Oh, no! That might cost a business some $$$. Since the citizens aren't businesses, they can lose the $$$.

Gas prices increase at every change in the wind. If a holiday is approaching, Exxon posts a billion in profits.

With the increase in gas prices, groceries have gone up.

Guess what didn't go up.

That's right. My fucking paycheck. Every year we get a $0.25 raise. (I know. You're salivating at all that extra cash.) I've been with the company for 10 years. That means I make $2.50 more per hour than I did when I started. Whoopie!

Tell you what, boss. You pay for the ticket, eh?

Posted by hiikeeba at 5:24 PM No comments:

Last night, I posted a new story to the JeffreyHolt.com library. It's called "The Big Dance," and it's supposed to be funny. Give it a read, and let me know what you think.

A New piece of Art 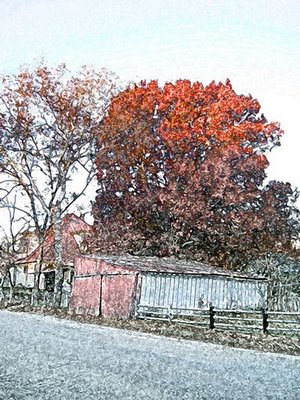 The other morning, as I was going to work, the rising sun was hitting the top of this tree around the corner from the house. It looked like the tree was on fire! I took a picture. Then I used Photoshop to make it look like a painting.

Posted by hiikeeba at 1:39 PM No comments: