We're gonna visit Donn in Virginia and Sean in South Carolina in a couple of weeks. Dad has already announced that he's not going to drive, so Mom and I get to do it all. And, I have already decided I will do as much as I can. But there have to be a few purchases first.

The first purchase was a Sirius satellite radio. If I'm gonna be cooped up in the car with 'em that long, I get my own radio! I've already picked out the classic rock stations I like. I have also marked the comedy channels. Dad, who had informed me he was taking his CD player and, apparently, his weight in CDs, even said, as I installed the antenna in the van and tested the radio, he would like to be able to hear the radio.

The second purchase has to be new fronts, as Jimmy Davis (my RJR coworker) used to say. I need new glasses. The ones I have are almost 20 years old. While the distance viewing is okay, the up close vision has gone. That's what pisses me off the most. I love to read, and now I have to hold books two feet from my eyes.

I hate getting old.

I'm also trying to think about what I'll need for the trip. Sometimes, I think like Batman going into town: "I'll need the fingerprint kit, the duster, and the night vision goggles." Other times, I think like Indiana Jones: "I got the whip, I got the gun, I got a bag to put sand in. . ."

So, i'm reviewing the One Bag website, trying to pare down my bag to the minimum. I'll be working on that for the next week or so.

Posted by hiikeeba at 7:31 PM No comments: 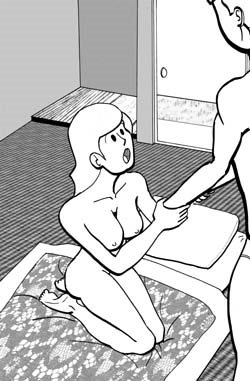 After a months long disruption, I have started working on Chasing the Sun again. Not that anyone cares, but I have drawn over 250 pages! I still have that many to go, however, so don't expect to see the ending anytime soon.

Anyway, this drawing is page 11 of chapter 11, or page 251. This scene was one of the first scenes that I wrote for the story. Lydia has learned that Ray has had sex with a couple of girls. She has a crush on him, and is trying to seduce him.

You might want to read the story. If you want. I don't want to push.

Normally, I'm pretty laid back. I don't like to kill insects unless they're bothering me. If there's a spider web in a spot I don't normally travel through, I leave it alone. A spider has to eat, too, y'know.

Sunday afternoon, I was getting a beer from the cooler on the back porch. I was whistlin', having a great time. I get even with the cooler when I feel a stabbing pain on the back of my neck. I hastily retreat to a safe distance and look around A pair of yellow jackets had started a nest right in front of my beer cooler.

Right in front of my beer cooler!

Had they been down at the end of the house, I wouldn't have bothered them. But no living thing comes between me and my beer cooler! I go back in the house to look for spray. We had moved all the spray out to the storage room at the back of the house. Right under the wasp nest. I did find a can of roach spray. Since I needed a beer, it would have to do.

Back outside, I peeked around the corner and spotted my prey. I raised the can, and started spraying. A fine mist covered the nest and after a couple of seconds, the wasps took off. I knocked the nest down and squished it. After retrieving my beer, I went back inside to put ice on the sting.

Sorry, wasps. But you were in the way.

Posted by hiikeeba at 2:17 PM No comments: