Is this about me?

Posted by hiikeeba at 7:09 AM No comments: 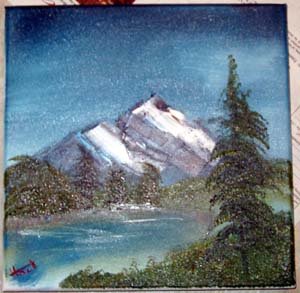 My first painting! I call it "Crap No. 1". Don't get me wrong, I don't think it's hideous. I think it's my first one. The second one will be better. And the third one, and the fourth one. Even though I call this "Crap No. 1," I'm still proud of it." 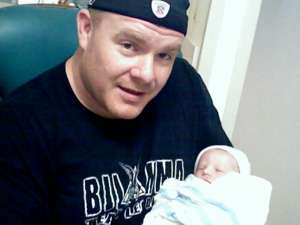 Steve and Rachel are the proud parents of Braedon Gordon Earl Holt; born 9/24/06.

Welcome to the family!

Posted by hiikeeba at 6:45 AM No comments:

Email ThisBlogThis!Share to TwitterShare to FacebookShare to Pinterest
Labels: Donn

I was leaving Kerrville today, and was following a slow moving Hummer through the construction zone, when they turned into Dollar General.

Why would someone who can afford a Hummer and and the gas to put in a Hummer be doing at a dollar store?

At about 10 am, the flight attendants began picking up our
drinks only a few minutes after giving them to us. The flight had been routine
until the co-pilot came on and announced that because of something bad happening
"back east," our flight would be diverted to Birmingham, Alabama.

I pulled out a set of jet flight maps and started looking
at where Birmingham was in relationship to home. (In retrospect, that may
not have been the smartest move I could have made. The gentleman sitting next
to me probably reported a fat man with a beard checking maps in-flight.)

The passengers spent the next half hour or so sitting straight
up, wondering what the hell had happened back east. Until we got to the gate,
we were pretty much in the dark. One of the flight attendants boarded the
plane and told us what happened. She told us to deplane, that we would not
be leaving today.

On the way to baggage claim, a security guard was waving
people off the concourse and into the terminal like a traffic cop. A guy walking
beside me veered into a bar that had a TV on. I started to follow, but she
waved me on, "Let's go! Everyone into the terminal!" As I passed the bar,
I could see several dozen people crowded around a TV mounted on the wall,
transfixed by the flickering images.

It was like a campfire. This one glowing box, transfixed
everyone in the bar, shining light onto their faces, and the shadows on their
backs blending into one wide, dark mass.

I turned on my cell phone, and was surprised to find a voice
mail from the office wondering where I was and if I was okay. I tried to call
and see what the heck was going on, but all I could get was a message that
said the Sprint network is busy and that I should try again later.

I got both my bags off the carousel, sat down and tried to
figure out what I needed to do. I managed to call Donn and got his answering
machine and told him where I was. (Until Friday, I was never able to get through
to Donn again.) I called home and talked to Dad. I tried calling Steve's cell
phone, but the line was busy. I called Rodney and Jeanne. I called the office.
I called Mom at work. I called everyone I could think of. Everyone said, "Just
hang tight." So I went off to see the folks at Southwest Airlines.

The gal behind the Southwest counter looked frazzled. All
she could say is, "I don't know," when I asked what the odds were I would
be leaving the next day. She gave me a voucher for a Best Western Suites,
and told me that the pick-up point was across from the baggage claim.

Baggage claim was at the far end of the terminal from the
Southwest counter. I had navigated through a throng of addled and confused
passengers, and a very visible, and very nervous, police presence to get to
here. That included toting the photon torpedo case full of golf clubs up the
escalator.

So, back down the escalator to wait for the van to the motel.
Meanwhile I passed the rental car folks. They looked like a grocery store
at 5 pm on the day before Thanksgiving, and, as a sure sign of the coming
Apocalypse, everyone had a cell phone in their ear.

I found the van that took me to the Best Western hotel. A
harried, blonde haired guy with authentic Southern accent drove the 15 of
us dazed travelers to the hotel. Shortly after we got onto the Interstate,
my cell phone rang. Gary's voice said, "Oh, man! I am glad your home!"

After we chatted a moment, we pulled into the hotel. Hotel?
This place looked like an apartment complex. I was seventh or so in line,
and they checked me in. The clerk pulled out a map, and said, "Walk out the
front door, go left, walk to the top of the hill and turn right. You're on
the third floor. Next!"

I gestured dramatically to the photon torpedo tube, and my
waistline, hoping to convince the guy that the cost of my imminent coronary
was worth, at least, a second floor room. No dice. He was already telling
a couple of ladies from Houston (we had chatted on the van) they were on the
second floor.

"Bar?" I whispered to a frantically rushing hotel employee
who was headed for the front desk. Our driver had already waved goodbye and
said, "I'm going back to the airport!"

The young lady stopped in midstride. Apparently concerned
with my torpedo tup to waistline display earlier, she asked, "Sir?"

She brightened quickly, stood straight up and pointed. "Over
there, sir!"

It was a four foot bar you would find in someone's basement,
complete with two beer taps and three bottles of booze on a small cabinet
with a sink behind it.

"It opens at 6 pm, sir!" She said, and then turned and went
behind the front desk to help check everyone in. It was 11 am. At this point,
liquor was not an option.

By the time I lugged everything to the top of the hill and
up three flights of stairs, everything I was wearing was damp with sweat,
and I sounded like Darth Vader. ("*huff* Luke. *huff* I am your father. *huff*")
I opened the door to my room and found an apartment only slightly smaller
than my last apartment in Austin. I left the photon torpedo tube by the door,
flopped onto the couch and watched TV, huffing and sweating.

Here I am, fifteen hundred freakin' miles from home. I am
calling people I haven't talked to in a while, just to hear a familiar voice.
Just to be reassured that I am not alone. Just to know, that if the end of
the world were to come, everyone would know where I was.

You want a title for this piece? That sounds like a good
one to me.

I paced the hotel/apartment, calling people, using my minutes.
(Travel lesson #1: Get a cell phone with free nationwide long distance. Take
it with you everywhere you go, and don't forget to take a desktop charger
and a car charger.) Then I got thirsty.

I mentioned that I had to walk uphill to my room. I should
also mention that the hotel was about ? of the way up a big hill. Just at
the bottom was little convenience store. God blessed me that day, my friends.
He did not strand me in a dry county. I walked to the bottom of the hill,
and perused the beer selection.

There were a couple of considerations. It was about noon.
I had about $40 bucks left. And the hotel's restaurant opened about the same
time as the bar. All I had had to eat since I woke up at Steve's apartment
was a couple of bags of Southwest Airlines peanuts. I bought a 12-pack of
Coors and bag of chips. Then I walked back uphill to the hotel. Across the
street was a moderately sized strip mall, with a Wal-Mart.

Now a quote from Bill Bryson:

"? With a pack you walk at a tilt, hunched and pressed forward,
eyes to the ground. You trudge; it is all you can do. Without, you are liberated.
You walk erect. ? You amble. Or at least you do for four blocks. Then you
come to a mad junction at Burger King and discover that the new six-lane road
to Kmart is long, straight, very busy, and entirely without facilities for
pedestrians-no sidewalks, no pedestrian crossings, no central refuges, no
buttons to push for a walk signal at lively intersections."

Sound familiar? Urban sprawl at work. In another book, The
Lost Continent, he describes trying to walk across the driveways of several
fast food restaurants without the benefit of sidewalks. Think about your local
Wal-Mart. How pedestrian friendly is it? See what I mean? I walked uphill,
in the roadside grass almost waist high, until I got back to the office of
the hotel. If you are familiar with apartment complexes, it was kind of like
the complex office.

Back in the room, after another hour or so of Darth Vader
impressions (well, it was a STEEP hill!), I sat down and started drinking
my beer, eating chips and watching the talking heads theorize about Osama
Bin Laden. Finally I found HBO.

I watched two movies. I still can't remember which movies
I watched. My eyes glazed over as I thought about where I was, what I needed
to do. But at least I didn't have to watch the towers fall again.

Finally, I took a shower. Hey! I'd been up and down that
freakin' hill six times. I could not stop sweating. I put on my emergency,
last ditch, set of clothes. (Travel tip#2: Always take one extra set of clothes.
Especially underwear!)

I watched the news a bit more, and decided I was hungry.
I had been told that the restaurant opened at 6 pm. It was a bit after 8,
so I headed downhill to the restaurant.

Six people sat in chairs infront of the bar watching the
news. I went into the restaurant, and found that it was a dining room with
a buffet table at one end. I checked out everything and realized I was too
late. I went back to my room, swearing.

I decided to go to the strip mall to get some fast food.
What strip mall genius only puts one fast food place in a strip mall? All
I could find was a Subway. So I bought a big sandwich (from a clerk who told
me that in Oklahoma gas was $10 a gallon. True, as it turned out, but I poo=pooed
him in my mind.), and headed back to my room. I watched the last bit of "The
Xmen" as I ate my sandwich and went to bed.

For those of you keeping score, yes, I did drink all the
beer.

Posted by hiikeeba at 7:17 PM No comments: