I can't tell you how many times I've watched "COPS" and seen the following scene:

Keep that scenario in mind.

In Austin, Texas, a curious cat pokes its nose into a hole in a wall in an apartment complex. The renter, thinking she would find some food the cat was interested in, finds some DVDS. She watches a DVD and learns it is a stash of child "p0rn" (that's to keep my "G" rating). The owner calls the cops. They check with the previous renter who confesses to hiding the DVD.

Posted by hiikeeba at 4:14 PM No comments: 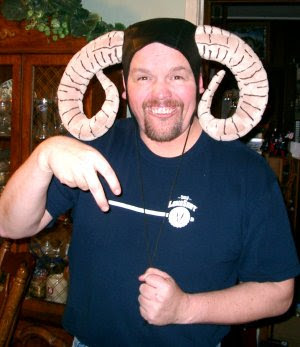 Gary came for a quick visit. He tried out my Tim the Enchanter hat.

Posted by hiikeeba at 8:07 PM No comments: 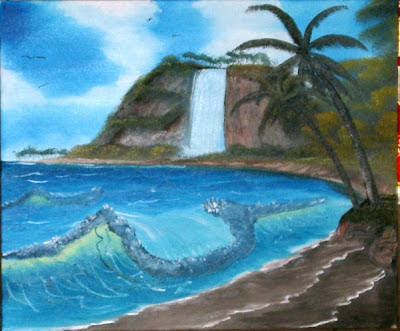 I had this idea: A tropical lagoon, a mountain on the far shore with a spectacular waterfall, and a few palm trees. All this needs is the SS Minnow on the shore.

The Ballad of Gilligan's Island
by George Wyle and Sherwood Shwartz


Just sit right back and you'll hear a tale,
A tale of a fateful trip
That started from this tropic port
Aboard this tiny ship.

The ship set ground on the shore of this uncharted desert isle
With Gilligan
The Skipper too,
The millionaire and his wife,
The movie star
The professor and Mary Ann,
Here on Gilligans Isle.


So this is the talel of the castways,
They're here for a long, long time,
They'll have to make the best of things,
It's an uphill climb.

The first mate and the Skipper too,
Will do their very best,
To make the others comfortable,
In the tropic island nest.

No phone, no lights no motor cars,
Not a single luxury,
Like Robinson Crusoe,
As primative as can be.

So join us here each week my freinds,
You're sure to get a smile,
From seven stranded castways,
Here on "Gilligan's Isle."

Posted by hiikeeba at 4:36 AM No comments:

Last night, while dreading going back to work, I was watching TV. I saw an ad for H&R Block. In it, one of the guys said it was tax season. It's official. Tax season begins on January 1 and lasts until April 15. Kinda like the way Christmas starts at the end of September.

Posted by hiikeeba at 5:23 PM No comments: