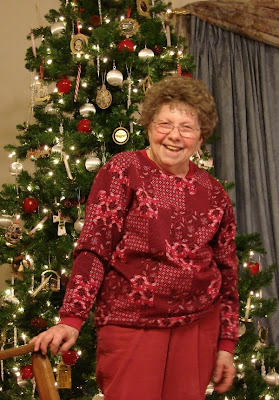 Ann Gale Holt was born January 27, 1937 at the old Sealy Hospital in Santa Anna. Ann's parents were the late Claudia (Bull) Holt and Roger Holt. Ann's mother died of breast cancer when Ann was a teen-ager, at which time she and her two brothers came to live with their aunt and uncle - Welton and Audrey Holt at Gouldbusk. After having attended school at Santa Anna, Bangs, Wylie and several others - Ann graduated from Mozelle High School with the class of 1955. Ann has been very active in the planning and conduct of homecoming events for the Mozelle Schools and missed very few school activities at Panther Creek, even after her children all graduated. She then went on to graduate from the Hendrick/Hardin-Simmons School of Nursing and became an RN in 1958.

On September 28, 1958, she married Bob Turner at the Welton Holt home at Gouldbusk. Ann was an active practicing RN until retirement in 2004. She still kept her RN license active and participated in all the required continuing educational programs, even after retirement. During that time she served as Director of Nursing and taught LVN classes at the Coleman Hospital. She then worked several years as office nurse for J.D. Duke, M.D. in Coleman. Ann also worked over 20 years as school nurse at Panther Creek/Mozelle/Talpa-Centennial schools as well as over 20 years as the school nurse at the Lohn schools in McCulloch County. During this same time frame, she was also working in several nursing capacities at both Holiday Hill and Coleman Care Center (Leisure Lodge at that time) - to include consulting RN.

Ann and Bob have three grown sons - Gary of Midland - Sam and wife Mary Jo of Denton and Darrell and his wife Leslie of Dexter, New Mexico. She had seven grandchildren - Bailey, Cassidy and JoLea of Dexter, NM and Samantha, Garrett, Grant and Abigale of Denton. Her grandchildren were the apple of her eye, her only regret being that they didn't live close enough to see as often as she wished. Ann and Bob celebrated their 50th wedding anniversary in 2008 - and only lacked 18 days reaching their 51st anniversary.

She has fought a long and courageous battle with cancer - the first of which began in 1990 - then with breast cancer being diagnosed early in 2004. Since that time she has been under constant treatment - radiation, chemotherapy, and even an experimental program. She became the poster girl for what a positive attitude and not giving up can do in prolonging quality life for all those who were close enough to observe. Ann, being a nurse herself, was not one to "shop for doctors" and was convinced that her Oncologist - Ralph Heaven, M.D. and the staff of doctors and nurses at Hendrick were the world's finest.

Ann is survived by her husband, Bob; her three sons and seven grandchildren, as well as her two brothers, Jerry and wife Bennie of Fredericksburg, Texas, Donn and wife Ann of Fredericksburg, Virginia, as well as numerous uncles, aunts, cousins and a host of really special friends. She was preceded in death by her mother and father, Claudia and Roger Holt, her aunt and uncle Welton and Audrey Holt, all her grandparents, and several aunts, uncles and cousins.

Posted by hiikeeba at 2:16 PM No comments:

"If I could build a wall from the Red River to the Rio Grande, so high that no Indian could scale it, the white people would go crazy trying to get beyond it." - Sam Houston

Posted by hiikeeba at 3:15 PM No comments: