This year, I suggested we try Alton Brown's Honey Brined Smoked Turkey Recipe for our bird.

It was FANTASTIC! We gave some to our neighbor, who told us later that she would buy us two turkeys if we would smoke both of them and give her one.

We boned the turkey and put it in a serving dish. Brandon filled his plate, and ate some and asked if we had ham too. When we told him that it was turkey, he said it was the best turkey he'd ever had. That's high praise coming from Brandon. He's a bit of a picky eater.

Rodney and Jeanne brought Katie and Brandon down, as if you couldn't tell, and we all had a great time. Katie even got up early to go to Wal-Mart for their Black Friday sale. And if you know Katie, she don't get up until the sun goes down!
Posted by hiikeeba at 4:36 PM No comments:

Email ThisBlogThis!Share to TwitterShare to FacebookShare to Pinterest
Labels: Thanksgiving 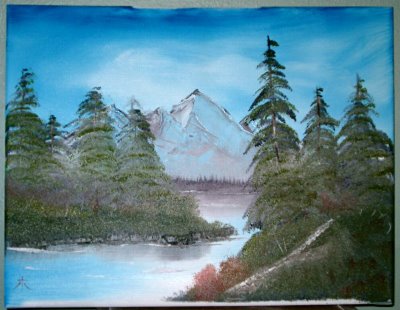 Yes, I know this is boring. I keep painting the same things! This one is a little different.

So, I watched Bob Ross on DVD and thought I'd try this painting again.

My previous attempt of this scene (Crap #4) was not as successful as I'd hoped. On #4, the background was okay (I could improve on the sky but the mountain rocked), the midground was kinda ehhh! (Nature does not work in even numbers. I learned that in ikebana class at Nagasaki Weslyan Junior College (now University) in 1984. (And, yes, I was pretty good at Japanese flower arranging, thank you very much. It was my favorite culture class. Thank God, Allah, Vishnu or The Flying Spaghetti Monster I didn't try to pick that up again! Fresh flowers every week? Oh! the humanity! And the $$$.....) The foreground, well, doesn't exist.

So in #8, I tried to create a foreground. I should have made the trees on the right bigger, and those on the left smaller. I should have made the land in the foreground extend more to the left. And, I should have had more highlights. But Rodney, my brother, was watching, and imitating Bob Ross, and I spent most of my time trying to paint and looking over my shoulder saying, "You want to paint this m*th*rf*ck*r!?" (Never paint with an audience. It never works. The forked path? That was Mom's idea. It's supposed to be a rock...)

Posted by hiikeeba at 9:18 PM No comments: 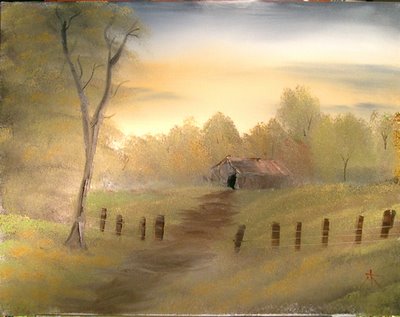 Yet more paint smeared on canvas. I have to confess, however, that the glow across the painting is sunlight on the canvas.

Posted by hiikeeba at 8:04 PM No comments:

You ever have an idea get away from you? 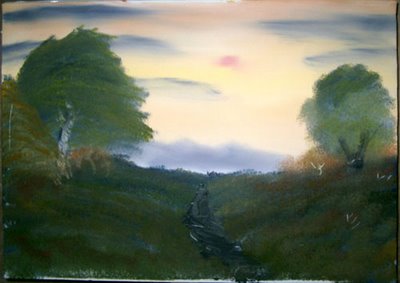 I had a definite idea in mind when I started this painting. Unfortunately, by the time I finished, I had forgotten what it was. And as I finished, I thought, "This sucks." But as it has been sitting around drying, it's growing on me. What do you think?